How My Homelab Became Critical Infrastructure During a Tornado

I recently made a design change to my homelab that paid off in leaps and bounds, and just secured my homelab as a part of my critical infrastructure during emergencies. This change was a pretty simple idea, but recently proved itself during a recent tornado near my home.

This post will largely be tooting my own horn, sharing why I think this is a good idea, but will also talk about severe weather and have some pictures.

The Scenario I Built For

I live in Kansas so severe weather is a part of life here. Things tend to come up suddenly, and you have to plan in advance of where to go and what to do to really be safe during these events.

Other than the basics (like food, water, and a shelter), there’s a few things that I feel are required during these events:

Depending on the severity of the storm, a number of things can fail that make getting those two things harder:

How I Solved It

In the imaginary scenario above, a hardwired internet connection can more-or-less solve those key problems and work around those key challenges. As long as the fiber and cables carrying data are in tact, if I can keep my servers powered I should be able meet my needs.

In my case, my homelab runs about 800 watts when it’s busy. This is obviously something a UPS can handle, but getting 30 minutes of runtime for 800 watts is a lot of upfront UPS cost, and a lot of recurring cost for batteries every 5-ish years.

Low power homelabs are also a thing, but in my case I didn’t want to outright replace all my hardware, and low power things wouldn’t be able to handle some of the more intense tasks I have.

My idea was to combine these two ideas. Have a small “core” network that gives basic internet access and communication that can run on a more affordable UPS, and have the extra things poweroff quickly like normal.

The idea I had was to create a new low-power node that would be able to run (along with low power switches and modems) for at least 30 minutes on a UPS. I used an old Celeron J1900 board, and this node draws less than 30 watts full-tilt.

I have backup copies of my core services running on it, and when the main lab goes offline Stellar will take over and run these services in a reduced capacity. The point here is just to have communication and information. Services like Plex, build servers, backups are all really nice, but not critical.

Stellar (named for a Stellar Core of a star) runs its own Proxmox installation and isn’t clustered with the main lab. This is done so when 3 nodes of what would be a 4 node cluster go down, Stellar doesn’t feel the need to fence itself. The services then just use VRRP, CARP, or other HA protocols to detect when their peer is down and change over.

Between Stellar, my access points, security cameras (fun for looking outside to see things, but not critical in this case really) the main switch and modem, it’s about 150 watts. I’m confident my old Cisco switch is 100 of those watts, and I plan on replacing it soon. On a 1000W UPS from office depot on old batteries, it gets 30+ minutes of run time.

How it Paid Off

On April 29, a tornado came very close to striking my house. This picture was snapped about a mile away and is looking in the direction of our hose. 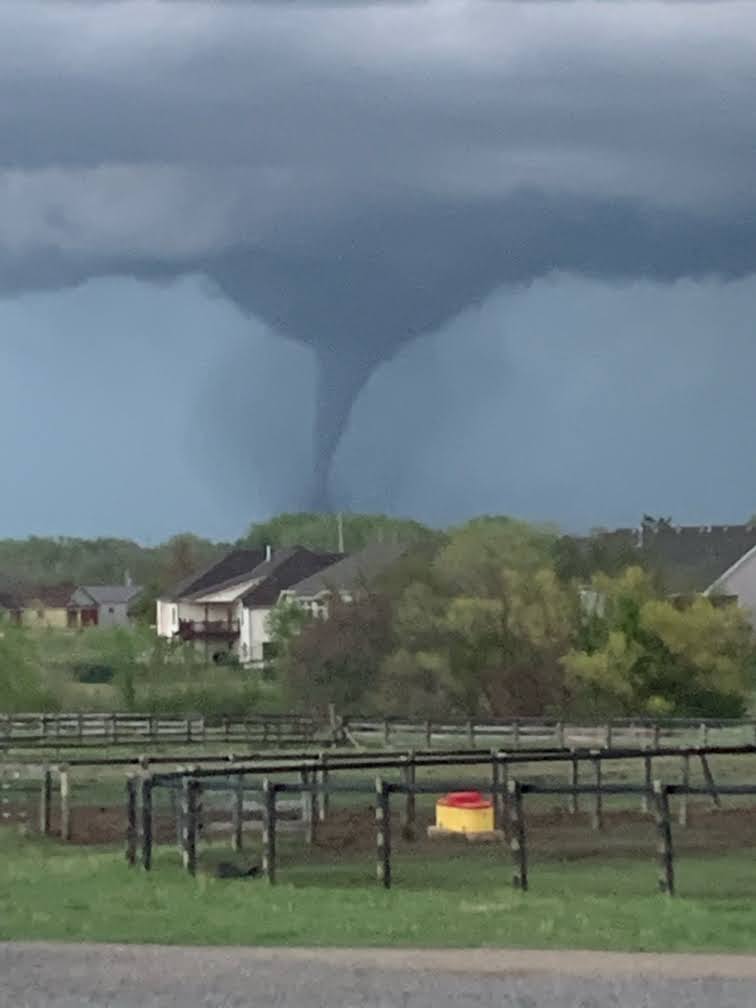 When we got the warning, everyone in my house went to the basement, we turned on the weather, and we started watching it get closer. As it got near, it took out the power to the house as expected. The main lab continued to run for about 10 minutes and did a clean shutdown as is expected, leaving Stellar and the core behind.

The tornado passed in another 10 minutes or so, and thanks to watching the weather streams we were able to confirm we were safe.

As expected, cell service also failed at that time. Thanks to Wi-Fi calling and a SIP phone, we were able to call our family and also let them know we were safe. Probably not critical that we’re able to do this, but its nice not to raise my parent’s blood pressure or worry.

After about 30 minutes from losing power, the weather was clear again but the power was still out. I called my family to let them know my phone is going to cut out (I couldn’t make or get calls with any reliability without Wi-Fi). The UPS for Stellar cut out shortly after, but we were safe and it had done its job perfectly.

If I can part some knowledge on other homelabbers, it’s this:

In my case, this setup is only going to get perfected and will always be a part of my lab. Stellar made a stressful situation much less so, and it will always be worth the setup trouble just for this one incident.