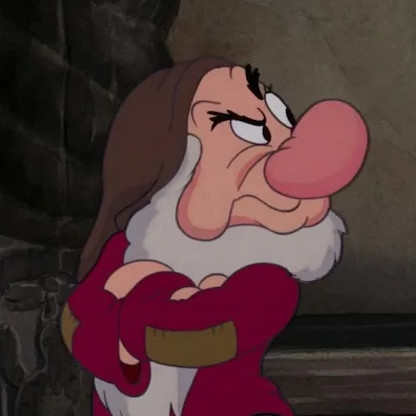 I Double NAT My Network, and I'm Proud

I double NAT my home network. And the funny part is I designed it that way.

Why This is Bad

If you’re a network person, you’ve already groaned. If you haven’t groaned, you probably should.

Network Address Translation (NAT) is a service that most consumer routers perform by default. Essentially, it’s what lets you connect your privately addressed network to a publicly addressed network and have things work. It takes the private addresses and translates them into the correct public address before sending it along.

Double-NAT is typically viewed as a bad thing. Essentially, you’re double-converting addresses on their way in and out of your network and blocking a ton of visibility for devices. Alongside this, there’s issues with management and port-forwarding that tend to make this a very undesirable “feature” of a network.

If you want know to more, read up on NAT.

What I’m Trying to Solve

I work from home, so a reliable internet connection is essential for me to work. My ISP recently had a few outages that lasted days, so this naturally disrupted my job and was the source of great frustration. I set out to “optimize” my network and made some plans for expansion.

Really, these are the two problems I wanted to solve:

The hard part with this was that with the residential ISP I have, switching between two routers is not very straightforward. These modems assume you only have one router, so they lock on to the first MAC address they see and only give their IP to that MAC address. If you want to failover here, you’ll have to spoof MAC address or power-cycle the modem.

The other challenge is that I wasn’t really interested in more physical routers for my setup. They make devices that run your firewall of choice, but these devices are a black-box to me: if they break you buy a new one. They might have some serviceable parts, but they’re usually no-name boxes that are re-branded so documentation is likely sparse.

The Prototype That Sorta Works

So the first version of my network I came up with was what I’m dubbing the “Hybrid Loop”. It didn’t really solve either of these problems though.

Here, just the Edge Gateway is doing NAT (indicated by the *).

In the normal state, the gateway forwards traffic to the firewall, which then passes it into the LAN (and other subnets, I’ve excluded those from all my diagrams). If the main firewall fails, the traffic can talk to the gateway directly and still egress.

There are a lot of problems here:

I had a few variations of this I thought about as well but never implemented, namely to replace the edge gateway with a compatible firewall to my VM so failover would be “better.” I put better in quotes because CARP was not designed for that setup at all and I would have had a whole new set of challenges.

This setup worked though, at least worked in the sense that it gave me internet and worked for a year or so.

So the problems above were related largely to my edge gateway trying to be something that can fail over too. It was a single point of failure that just seemed to be pretty inflexible.

The solution I came up with was to create a new DMZ network that sits between everything: 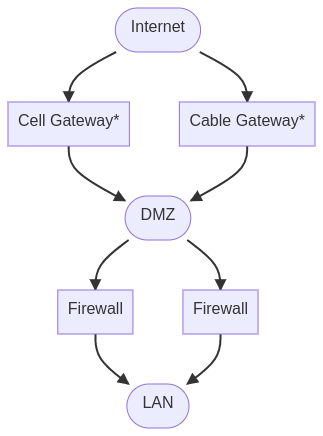 Is this overly complex? Probably. Let’s dive in.

So the idea here was to create some device that the cable modem can see to make it oblivious to the double routers ahead. The cable gateway is just a small Edgerouter X that does this job. This device has to NAT more-or-less, since the modem gives out a single public IP and wants a single MAC.

This new DMZ network is privately addressed, and gives both the firewalls a nice place to live. This way I can run a pretty vanilla CARP setup with VRRP and all the bells and whistles. The firewalls are configured with multiple gateways, and if it detects the cable connection is down, it just switches over.

Likewise, if a firewall fails, it fails over in short order with minimal drops.

This also gets rid of my single points of failure, since the cable gateway isn’t really required anymore, if it fails I just fall back to cell service.

This isn’t perfect though, specifically with port forwarding and firewalls.

So the edge gateways can directly talk to all the devices on the LAN which is good, but that means that I need two firewall entries now: I need to add the entry to the edge and to the firewall. I can’t disable the firewall on the firewalls, as I need them for inter-vlan routes, so I’d be stuck with this setup.

For static ports, this isn’t a huge deal actually, it’s double entries but do-able. The problem’s really when you want to play any console games.

My Nintendo Switch and PS4 rely on UPnP to dynamically port forward things. The issue is now I’d need double UPnP in this setup: one for the firewall and one for the edge. You can work around this, but you basically have to blow a hole in your firewall (literally, Nintendo’s help site says to forward several thousand ports to your switch on the off chance one is used).

To prevent having to double-enter everything and to account for dynamic ports, I figured I’d just setup some cath-all rule to forward everything along at the edge and disable the firewall. The main firewall is still filtering things, so there’s not a lot of additional risk. Home routers call this a DMZ, but it’s a destination NAT rule and firewall rule that just blindly forward traffic along with no regard.

When you set this up, you need a single IP to forward to though. Port Forwarding isn’t super smart so it needs to know where internally to route stuff, and this has to be a single IP. But since the edge can reach all the servers by IP, what IP do I put in? If only I could combine them all behind the firewall somehow.

Yeah, exactly that. If the firewalls also NAT, the edge can just blindly forward things to the firewall, and it’ll sort it out. This is actually a great solution, as it un-breaks UPnP for the game consoles, gives me a single place to do firewall rules, and doesn’t really open anything else up as everything gets sent to one fixed address.

I know the network engineers out there are crying, and I’m sorry. Yes, I’m sure there’s a performance hit but the edge and firewall are overkill enough that I don’t feel it.

I’ve just put the finishing touches on the config, but so far things look just fine actually. I’m sure I’ll change it all in 8 months again anyway.